One of Principal Tuba TJ Graf’s most memorable performances was on the football field instead of the stage: the Super Bowl XLVIII Halftime Show with Bruno Mars and the Red Hot Chili Peppers in 2014. No worries about wrong notes. “I was an LED light performer,” says TJ, who grew up in Roxbury Township, NJ. Turns out TJ has many skills, and we’re grateful he’s bringing his musical expertise to the TFO stage, where he is in his first season as principal tuba. He succeeds William Mickelsen, who retired after more than 40 years. Here is more about TJ:

Education and experience: Completing his Bachelor of Music in Professional Studies at the University of Miami’s Frost School of Music. At UM, he is a Stamps Distinguished Ensemble Scholar and has been a member of the Stamps Brass Quintet. For the past two summers, he has been an orchestral fellow and the principal tuba of the Aspen Festival Orchestra at the Aspen Music Festival and School. Prior to Aspen, he attended the Eastern Music Festival.

Why did you choose tuba? What age did you start playing?

I actually didn’t choose to play the tuba! In the fifth grade, I chose to play the French horn. When I was in the seventh grade, the tuba players in my middle school band decided to quit. I was one of the biggest kids left, so my band director asked if I’d be interested in trying the tuba.

What fascinates you besides music?

I love playing and watching sports (especially baseball and basketball), traveling, and coffee. I also like reading philosophy and the classics; recently I’ve been getting more into novels as well. In my studies at the University of Miami, I took several business courses and became very interested in the field of corporate sustainability.

What is the absolute best part about being a professional musician?

I’m unbelievably fortunate to make a living doing something which I truly enjoy. Through being a professional musician, I’ve been able to travel to some incredible places, to make some great friends I otherwise would have never met, and to just have a lot of fun playing music.

What’s the most embarrassing thing that has happened to you on stage?

Bartok’s Concerto for Orchestra has several uncomfortably fast mute changes (and tuba mutes are uncomfortably large to begin with!). One of these happens in one of the brass section’s most important passages in the entire piece. I quickly took the mute out and put it on the floor next to me. As I came back in, I noticed that it was rolling away from me and through the middle of the double bass section!

What excites you about the Tampa Bay area?
I’m a big New York Yankees fan, so being here for spring training at Steinbrenner Field is going to be a ton of fun. The other sports teams in the area will also be exciting to get to know better over the next few seasons. There also seems to be a ton of local breweries to explore, along with a lot of great restaurants!

What excites you about The Florida Orchestra? Tell me about the chemistry of the brass section!

The entire orchestra is very friendly and welcoming and there is a great group of young musicians here. The low brass section is especially fun to play with, because each of us comes from a different school/tradition of brass playing (Joël studied in Paris, Ross in Boston, Harold in Chicago, and I studied with players from New York). This creates a very unique chemistry both personally and musically! 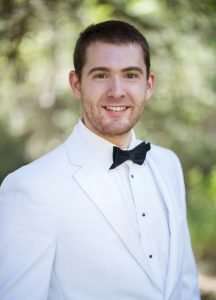