The Emily R. Nelson Chair Given by Duke Energy

Sarah Shellman is currently principal second violin with The Florida Orchestra; she joined the ensemble as a section violinist in 2002. She last appeared as a soloist on the TFO Masterworks series in March 2011, performing Thomas Ades’ Violin Concerto “Concentric Paths.” She’s also been featured on the Coffee series programs performing “Winter” and “Spring” from Vivaldi’s The Four Seasons and Bach’s Concerto for Two Violins in D minor with Nancy Chang.

During the summer, Shellman performs as a member of the orchestra at the Cabrillo Festival of Contemporary Music (Santa Cruz, California). She is an advocate for the performance of works by living composers as well as for the expansion of diversity, equity, and inclusion initiatives within the classical music profession.

Shellman graduated from the Oberlin Conservatory of Music in 1998 with a bachelor’s degree in music and the University of Houston in 2000 with a master’s degree in music. While living in Houston, she played with the Houston Grand Opera, Houston Ballet, and as a freelance musician. In addition to her work on the modern violin, she has also performed with several early music ensembles as a violinist, violist, and mezzo-soprano. 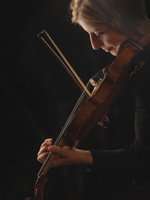