Anybody who meets Sandra del Cid-Davies, who joined TFO on flute/piccolo this season, knows she has a passion for music and life that far outsizes her tiny piccolo. And it certainly comes through in this Q&A, which feels like a friendly chat over a piece of chocolate cake.

Background: Grew up in Fairfax, Virginia, and received her bachelor’s in music from the Peabody Conservatory, following up with her master’s at Northwestern University. Since 2008, she has been part of the Orlando Philharmonic Orchestra, where she has been a featured soloist. Other professional experience includes the Bach Festival Orchestra, Brevard Symphony Orchestra and Washington Bach Consort.

How did you choose flute/piccolo?

I started on violin when I was 4 and piano when I was 7.  So here I was at 8 years old walking to school when suddenly I had an epiphany that the time had come for me to learn a new instrument.  I thought very carefully and I decided on the piccolo because it was the smallest instrument and, therefore, the cutest.  That meant I had to learn the flute, which was just fine with me.  After all, everyone I knew who played the flute was either a glamorous high school student or an angelic child that would float in and play some Gluck at all those Suzuki Summer Institutes I went to while I was schlepping on Vivaldi and Bloch.  So after a year of pleading with my parents and dismantling my wire stand so I could pretend I was playing the flute, I finally got one!  And the rest is history…

What fascinates you besides music?

Faith and family for sure.  People, I really love people.  And then definitely watching elite and NCAA gymnastics! Seriously, I’m obsessed because I never got to actually do it.  Figure skating, gastronomy (I just love to eat), and pandas (plus any other cute animal).

Describe a musical experience that changed your life.

This is a hard question because I feel there is a constant symbiotic relationship between the music I am experiencing and what’s happening in my life. For example, a few years ago I was going through a difficult season of life, and I heard this incredibly moving and simple melody on the flute streaming on my computer.  It expressed everything that was in my heart.  So I immediately looked it up and saw it was the first movement of the Rouse Flute Concerto. I felt so far away from making music of that caliber, so I just said this little silent prayer that I wanted to play this music.  Somehow.  And then life went on.  Four months later, I was corresponding with a conductor who said, “Hey I was thinking of doing some of Christopher Rouse’s music next season.  How would you feel about playing his flute concerto?”  Boom!  I could not believe it.  It remains to this day the most organic artistic process I have ever had with a piece of music.  Now whenever I listen to it, I am filled with gratitude and peace.

What’s the most embarrassing thing that’s happened to you on stage?

Oh dear. Last season TFO was performing Mahler’ Symphony No. 2 and at the time I was living in Orlando.  I left around 4 for a concert that began at 7:30, and was making great time until a massive car accident caused a 90-minute delay.  All I could do was call the personnel manager and explain that I would certainly be late to the concert.  So while I was stuck on I-4 catastrophizing like a mature adult, the rest of the TFO flute section scrambled to cover my part until I arrived.  At which point, it had been decided that I would walk on stage along with the soprano during the third movement (you know, like the featured guest artist that I wasn’t!).   And that’s exactly what we did, and I sat down like nothing was wrong and proceeded to play the rest of the symphony.  And it’s funny, because the piece is so involved for all musicians that several TFO members later said they had no idea what happened!

What excites you about the Florida Orchestra, especially in its 50th season?

The quality of the orchestra. We are performing a lot of difficult music this year that lesser orchestras would not be able to handle.  That is definitely something to celebrate!

What about you would surprise people?

I met my husband, Dan, while dangling 30 feet in the air at a local rock climbing gym.  It was hilarious.  Our story was like one of those cheesy romantic comedies that you see on the Hallmark Channel.  The only thing missing was having perfectly straight white teeth.  It sounds totally obnoxious, but it truly is our story! 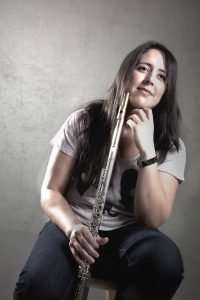