Robert Smith has played the trumpet since he was nine years old. After a student career winning top spots in Florida All-State bands and orchestras, the Chicago Civic Orchestra and a concerto contest win at Brevard Music Center, he attended Northwestern University and was later awarded a Fellowship with the Berkshire Music Center at Tanglewood. His principal teachers included former members of The Cleveland Orchestra and the Chicago Symphony, among others.

Before joining The Florida Orchestra, Smith performed principal trumpet work in the Mexico City Philharmonic, Mexico State Symphony Orchestra, and Charleston Symphony. He had also been an active freelance player in the greater Chicago area, performed as principal trumpet with the Elgin Symphony and the Chicago City Ballet, and was active as a recording musician in the commercial studios in Chicago and with Music of the Baroque.

Smith joined the Florida Orchestra in 1984 and has served as its principal trumpet since 1994. He has been a featured soloist in its concerts numerous times, performing works by Haydn, Shostakovich, Vivaldi, Arutunian and Arban. He has also served as a guest principal for the symphony orchestras of Dallas, Houston, New Zealand and Singapore, and also as guest associate principal with the San Francisco Symphony. He has served as a guest baroque trumpet specialist on Bach’s Brandenburg Concerto No. 2 with several orchestras in Florida and Illinois.

Smith joined the Crested Butte Music Festival in 2009, and that year also participated in the Cabrillo Festival of Contemporary Music. 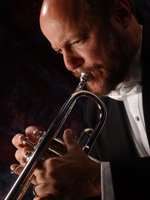