Originally from the Ukraine, Oleg Geyer began playing violin at age three and attended the Kiev Music Academy for gifted children. He received his bachelor’s and master’s degrees in music from the Kiev Conservatory in the Ukraine.

Prior to winning the audition at The Florida Orchestra in 1993, he served as concertmaster of the Ukrainian National Symphony Orchestra (Kiev, Ukraine), the Gdansk Chamber Orchestra (Poland), the Opera Theatre (Sophia, Bulgaria) and the Krakow Opera Theatre (Poland). In addition, Geyer was a first prize winner at the National Competition for the best performance of a piece by a Soviet composer.

Geyer has been well established and very active as an orchestral member, chamber musician and solo performer throughout central Florida, including Orlando and the Tampa Bay area. He has been one of the soloists in a triple concerto with Orchestra Camerata Ducale from Piemonte, Italy at the Viotti Summer Festival 2007 in Verchelli, Milan and Turin, Italy. He is a violin professor at St. Petersburg College and leads his own Allegro String Quartet. 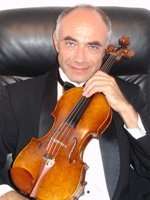