A native of Taiwan, violinist Nancy Chang has performed internationally under some of the world’s most celebrated conductors. As a member of the Verbier Orchestra in Switzerland from 2003 to 2007, Chang toured over 20 countries, performing regularly under the batons of James Levine, Charles Dutoit and Gustavo Dudamel, to name a few. She received her bachelor’s and master’s degrees in violin performance from the Manhattan School of Music, studying principally with Ik-Hwan Bae, Lucy Robert and Peter Wenograd. In addition, she had master classes with Sydney Harth, William Preucil, Miriam Fried and Glen Dicterow.  Following her years of study in New York, Chang was appointed a fellow at the New World Symphony in Miami Beach under the baton of Michael Tilson Thomas, where she served as rotating concertmaster from 2003 to 2006. She is a former ASTA competition winner and has performed as soloist with The Florida Orchestra, Burbank Chamber Orchestra, West Los Angeles Symphony and California State Los Angeles University Orchestra. Chang has served as a faculty at the Eastern Music Festival and has attended Spoleto USA and the Texas Music Festival. Other professional orchestra experience includes appearances with the Albany Symphony, Sarasota Orchestra and the Opera Tampa Orchestra, where she currently serves as concertmaster. Chang joined The Florida Orchestra in 2006 and was appointed associate concertmaster in 2007. 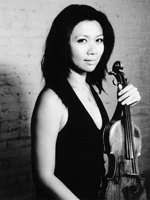