Violinist Lucas Guideri joined The Florida Orchestra as assistant principal second violin in 2010 and served as acting principal second violin of the orchestra in 2011. He is currently on the faculty of the Eastern Music Festival. He has performed with several orchestras in New York, including the Westchester, Long Island and Brooklyn philharmonics and the New York Virtousi, as well as with the Richmond Symphony in Virginia. Guideri has appeared in recital at the Aspen Music Festival Starling Recital Series, Juilliard School and Aaron Copland School of Music and in Italy.

As a chamber musician, he has performed throughout the New York area including at the Merkin and Weill concert halls, as well as the National Arts Club. He has collaborated with several great musicians including Daniel Phllips, Marcy Rosen, Charles Neidich and Robert Vernon. Guideri has performed as soloist with the Florida Orchestra, Queens Symphony Orchestra, and Queens College Symphony and Chamber Orchestra. He received his master’s of music degree from the Aaron Copland School of Music in New York. He also earned a medical degree from New York Medical College in 2003, before returning to music. Dr. Guideri is an adjunct professor at Clearwater Christian College, where he teaches violin, viola and chamber music. 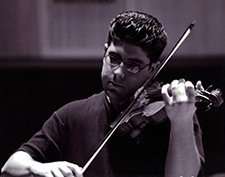