Kurt Grissom joined The Florida Orchestra in 1984 under then Music Director Irwin Hoffman. He graduated high school from the Interlochen Arts Academy in Michigan in 1979 and did his undergraduate studies at the University of South Florida, New England Conservatory of Music and The University of Tampa (bachelor’s degree in music in 1985).

He was a Florida Gulf Coast Symphony Young Artist Concerto winner in 1977, attended the Tanglewood Music Festival on a fellowship in 1987, and has performed with the Boston Symphony Orchestra under Seiji Ozawa and Leonard Bernstein as well as the Naples, Jacksonville and Orlando orchestras of Florida. Grissom also held the position of personnel manager of The Florida Orchestra from 1991 to 1999.

He has been the percussion instructor at Hillsborough Community College for over 15 years and has taught privately since 1983. He also has been active with the Pinellas Youth Symphony as a percussion coach since 2001.

His outside interests primarily include spending his free time with his three daughters and distance hiking and backpacking during the summer months. Since 2002 he has thru-hiked the Appalachian Trail from Georgia to Maine, Vermont’s “Long Trail” and extensively in the Austrian Alps in 2005. 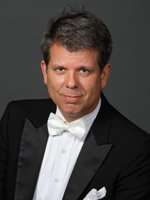