John Shaw is the principal percussionist with The Florida Orchestra, which he joined in 1992. He has been with the Eastern Music Festival in Greensboro, North Carolina since 2008, where he also serves as principal percussion. Shaw earned a bachelor’s of music degree from Florida State University, where he studied with Gary Werdesheim, and a master’s of music degree from Temple University as a student of noted Philadelphia Orchestra percussionist Alan Abel.

Shaw has been featured as a soloist with The Florida Orchestra many times, performing the Concerto for Percussion by Joseph Schwantner, Concerto for Two Pianos and Percussion by Bela Bartók, and Veni, Veni, Emmanuel by James MacMillan. His eight-member steel drum band, the Tampa Bay Steel Orchestra, was featured with The Florida Orchestra in both March 2005 and October 2009 as part of the orchestra’s pops series. He performs Tan Dun’s Water Concerto with TFO in April 2014.

Shaw has also been the head of the percussion studio at St. Petersburg College since 1996, directing the Percussion Ensemble and Steel Drum Band as well as teaching applied lessons. Shaw currently serves as vice-president of the Florida chapter of the Percussive Arts Society and presented master classes on orchestral percussion at the society’s 2010 and 2013 International Convention. He is an artist for Zildjian, Pearl/Adams and Freer Percussion. He lives in St. Petersburg with his wife, Florida Orchestra and Eastern Music Festival Principal Harpist Anna Kate Mackle. 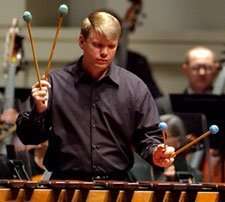