Violinist Jeffrey Multer has been recognized worldwide for his passionate performances, extraordinary depth of musical understanding and brilliant technique. A native of upstate New York, Multer made his Kennedy Center debut in 1993, and since that time he has appeared in recital, as a soloist with orchestra and as a chamber musician throughout North and South America, Europe and Asia.

This year marks his ninth season as artistic director of chamber music at the Eastern Music Festival in North Carolina. Praised for his dynamic and accessible programming style, Multer has been appointed this season as artistic director of the newly formed Palladium Chamber Players in St. Petersburg, Florida. Prior chamber music positions include the Oxford Quartet, where at age 28 he was appointed first violinist. In 2001, he was asked to join the critically acclaimed Elements Quartet, whose New York series was named Best Classical Music Event of 2003 by The Washington Post.

Multer has performed numerous times at Lincoln Center, the Kennedy Center, Carnegie Hall, Weill Hall, Merkin Hall and the National Gallery in Washington, DC. Recently he has appeared at the Mozarteum in Salzburg and the Rudolphinium in Prague with the Orpheus Chamber Orchestra, the Theater Chamber Players of the Kennedy Center and the Smithsonian Chamber Players. Past festival appearances include Great Lakes, Barga Tuscany, Tibor Varga in Budapest, Central Vermont and Breckinridge, CO. This season in addition to his busy concert schedule, Multer made his debut at the Casal’s festival in San Juan, Puerto Rico. In May of 2013, he became one of the few United States artists to travel to Cuba, where he appeared as soloist and conductor with the Cuban National Orchestra in Havana.

A committed educator, Multer is currently head of violin faculty at the Eastern Music Festival. He has recently taught and coached at the New World Symphony in Miami and at the National Orchestra Institute at the University of Maryland. Previously he has held teaching positions at the Miami University of Ohio and in the pre-college division of The Juilliard School.

Multer began violin studies at age five. At 16, he moved to New York City to continue studies at The Juilliard School where he was the recipient of a Lincoln Center Fellowship. His teachers include Lewis Kaplan, Shmuel Ashkenasi, Gerald Fischbach and Arnold Steinhardt. Coming from a long line of accomplished musicians, he is the seventh Multer to have attended Juilliard.

Multer has recorded for Albany and Naxos records. 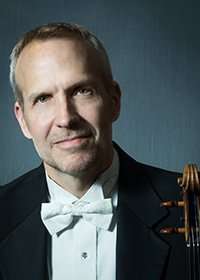