James Connors is a native of Boston, Massachusetts and assumed the principal ‘cello chair of The Florida Orchestra in 1988. He has studied with such renowned teachers as Janos Starker, Gary Hoffman, Leopold Teraspulsky and Wolfgang Laufer. In the past, he was featured as soloist with the orchestra in the Brahms Double Concerto for Violin and ‘Cello, the Haydn Concerto in C Major and the Schumann Cello Concerto in 2007.

An avid proponent of chamber music, Connors is a member of the Bayside String Quartet and appears frequently on the chamber music series at the Museum of Fine Arts in St. Petersburg and Palma Ceia Presbyterian Church. In addition, he participated in the Aspen Music Festival, Spoleto Festival of Two Worlds (South Carolina and Italy) and Taos Chamber Music Festival.

Connors lives in Tampa with his wife, Emily, 14-year-old son Joshua, and their beloved Labrador Retriever, Huckleberry Finn. He plays a modern Bulgarian instrument by the maker Apostol Kaloferov. 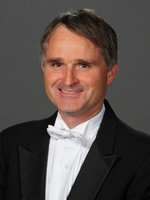