Harold Van Schaik has been with The Florida Orchestra since 1993. Previously, he had been with the Honolulu Symphony for four seasons. He has also performed with the Chicago Symphony, Dallas Symphony, Rochester Philharmonic, Boston Symphony, Syracuse Symphony, Kansas City Symphony and the Los Angeles Philharmonic. Van Schaik received his bachelor’s degree in music from Northwestern University and his master’s degree in music with a performer’s certificate from the Eastman School of Music. Outside the symphonic realm, Van Schaik is an active soloist, clinician, chamber musician, and jazz performer. He was awarded first prize in the 1987 International Trombone Association solo competition. He has presented recitals, master classes and clinics throughout the country. Van Schaik has been a featured soloist with several university ensembles as well as the U.S. Military Academy Band, U.S. Army Orchestra, Honolulu Symphony and The Florida Orchestra. He also performs as a member of the Nay Palm Bones trombone quartet, presenting recitals and recording on the Summit label. In the jazz field, Van Schaik has played with the big bands of Duke Ellington, Woody Herman, Tommy Dorsey, Les Brown, and Jimmy Dorsey, as well as locally with the Jazz Legacy Big Band. He can also be heard on numerous soundtracks, jingles and as a backup musician for pop and commercial artists. Van Schaik has performed in the pit orchestras of several major Broadway shows including Phantom of the Opera, Les Miserables, Miss Saigon and Cats. During the summer, Van Schaik can be found performing in the Shenandoah Valley Bach Festival, Skyline Brass Festival, and Wintergreen Festival. 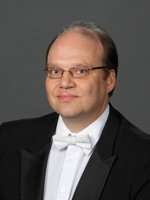