Dee Moses has been the principal double-bass of The Florida Orchestra since 1975. His career, in addition to symphony and opera, has encompassed solo playing, chamber music performance, composition, and teaching.

He presently serves as adjunct instructor of double-bass at the University of South Florida, maintains a private studio, and presents master classes and recitals. Moses received his high school diploma from the North Carolina School of the Arts. His bachelor’s and master’s degrees are from the Cleveland Institute of Music, where he was a student of Lawrence Angell.

Summer affiliations have included the Florimezzo, Musica Viva, Cooperstown, Scotia, Eastern, Bowdoin, and Taipei festivals. In the summer of 2005, Moses began performing as principal bass of the Wintergreen Summer Music Festival in the mountains of Virginia. In 1996, Moses first performed chamber music with the esteemed musicians of La Musica International Chamber Music Festival, with whom he has subsequently collaborated frequently. In April of 1999, Moses performed the Koussevitsky Concerto for Double Bass on the Masterworks concert series of The Florida Orchestra and also appeared as soloist in March 2006 with the Paganini Moses Fantasy.

Recently, Moses has delved back into contemporary composition and performance in collaboration with his wife, the modern dancer and choreographer Elsa Valbuena, who is often joined onstage by daughter Josianne. Their group, Gaudere Danza, was featured in a full-length evening as part of the first Cali En Danza contemporary dance festival in Cali, Colombia in June of 2006.

Moses has also been featured soloist in the Florida premiere of the John Harbison Concerto for Bass Viol as part of a consortium of orchestras whose co-commission was organized by the International Society of Bassists. 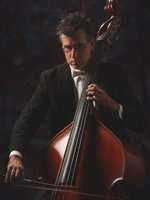