From the moment Clay Ellerbroek picked up his first flute at the age of 13 in Grand Rapids, Michigan, he knew he would never put it back down again. Music is like another form of communication for Clay, conveying energy, emotion and meaning to the listener with every note. He has delighted audiences in Tampa Bay since 2009, when he was selected as principal flutist for the The Florida Orchestra. His refined talent that won him the position was forged at the Interlochen Arts Academy. From there, he then attended the New England Conservatory of Music in Boston, where he found his mentors Leone Buyse and Paula Robison.

When The Florida Orchestra’s season ends every spring, Clay is still eager to continue his passion. He regularly performs with the San Diego Symphony, San Diego Opera and Mainly Mozart Music Festival. His distinctive heartfelt performances have also been heard with the San Diego Chamber Orchestra, Honolulu Symphony and Mladi Chamber Orchestra in Los Angeles. Over the years, he has performed in a number of summer music festivals, including Tanglewood, the Grand Teton Music Festival, the Crested Butte Music Festival and the La Jolla Music Society Summerfest. At the request of Maestro Jahja Ling, Clay graciously performed as acting principal flute for the San Diego Symphony’s 2005/2006 season, and he toured China with the ensemble in 2013.

One of his most memorable performances has been preserved in a recording for Bridge Records of music by the composer Chinary Ung. The New York Times‘ was so impressed with it, that it made its list of Records of the Year for 2009. Finally, in the fall of 2011, as decades of cold relations with Cuba began to thaw, Clay, along with The Florida Orchestra Principal Winds, traveled to Cuba as part of TFO’s historic cultural exchange with the island nation and thrilled the Cuban people. On those rare occasions when Clay isn’t performing or practicing his instrument, he’s known to compose culinary feasts in the kitchen that delight your sense of taste as much as his music delights your sense of hearing. His husband, Trevor Pettiford, certainly thinks so! 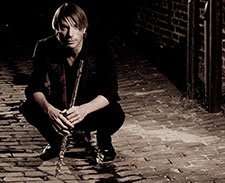