Labeled a “rising star” within the conducting world (Anwar Nasir to the Associated Press), Conductor Chelsea Gallo has been praised for her ability to “lead the orchestra with grace and fiery command” (Schubring, Michigan Daily)

For the 2022-2023 season, Gallo will be assistant conductor to The Florida Orchestra and will be a regular guest conductor with the Louisiana Philharmonic Orchestra. She is also a finalist for the music director positions of the Missouri, Lancaster, Bridgeport, and Youngstown symphony orchestras. As a guest conductor, Gallo has conducted the Jackson Symphony, Hartford Opera, Toledo Symphony, and Slovak Sinfonietta, amongst others. Upcoming guest conducting debuts include the Virginia Symphony, Orlando Philharmonic Orchestra, Collone d’Arte, Irish National Opera, and Orchestre Symphonique de Bretagne.

Recently, Gallo was the assistant conductor of the Louisiana Philharmonic and conducting fellow with the Dallas Opera, and she served on the conducting staff for the Detroit Symphony Orchestra. In those positions, Gallo regularly assisted some of the world’s most prominent conductors including Leonard Slatkin, James Gaffigan, Eun Sun Kim, and Carlos Miguel Prieto. Engagements on behalf of the Detroit Symphony Orchestra included recording the music for Lincoln Motor Company™ Aviator commercials, Young Persons concert, and Detroit community leadership events.

Gallo has described her conducting pursuits as “a devotion to sharing the relevancy and humanity within classical music.” With her affection for science and music, Gallo has collaborated on projects aimed towards uniting both worlds. She has worked with organizations such as the National Aeronautics and Space Administration (NASA), Lockheed Martin, the National Institute of Aerospace (NIA), and the European Space Agency (ESA). She led recording projects for the Orion ETF-1 Launch Mission. The ensemble became the official artistic ensemble for the Hubble Space Telescope 25th anniversary celebrations. She was recently  invited on behalf of the nuclear engineering department at the University of Michigan to partner on a project geared towards encouraging creativity within the hard sciences by drawing parallels between running a nuclear reactor and leading a symphony orchestra.

Gallo studied conducting in Vienna, Prague, and Banska Stiavnica with the late Maksimilijan Cencic and Leos Svarovsky. In Vienna, she studied piano with Giorgi Latsobidze and violin with Barbara Gorzynska. Gallo holds a doctorate of musical arts from the University of Michigan, where she was awarded the Helen Wu graduate fellowship in conducting. At Michigan she studied with conductor and educator Kenneth Kiesler and assisted Martin Katz and Kathleen Kelly on opera productions. Furthering her conducting education, she has attended festivals and masterclasses with conductors such as Sir Simon Rattle and Daniel Barenboim.

Outside the concert hall, she reads and studies languages. She loves yoga, basketball, long-distance running, and hiking. She has a passion for baseball and played professional fastpitch for the Vienna Wanderers. 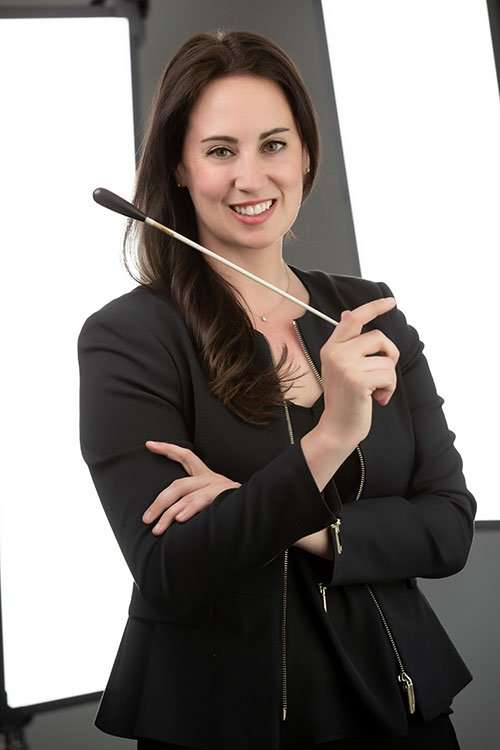