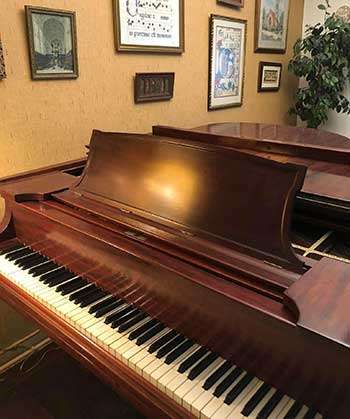 The nearly 100-year-old Steinway & Sons piano stood quiet and alone in the living room of Mari Reive’s empty childhood home in St. Petersburg, where it had been the center of her family’s life since 1964.

The piano’s story started long before that, in the 1930s, when it was given to Mari’s father, Robert Setzer, by his father in Tampa, eventually launching Bob’s storied four decade-career as an organist and professor responsible for bringing the 1,600-pipe Heissler organ to St. Petersburg College.

Many famous hands played the Steinway over the years. Mari herself first touched the ivory keys as a baby on her father’s lap in front of the rich dark wood. It started her own journey with music as an organist around the world, and now as Ticket Center manager for The Florida Orchestra.

For the piano that had created so much joy, the past several years had surrounded it with so much loss. First Mari’s dad, then her brother, Robert, and now her mother, Mary Lee, were gone. Soon the house would be, too, sold to a new family. The piano that had been a part of Mari for more than 60 years needed a new home.

Should she keep it? Didn’t feel practical at this point in her life, so she initially decided to sell it. But finding the right home turned out to be more important than the money – which could be tens of thousands of dollars. She wondered, “What can I do with this that would make some kind of difference?”

Mari wanted the piano to be happy.

A few years ago, life was good for George Hambos as a music management and piano performance double major at Florida Southern College. He was playing out a lot – even flew up for a gig at Harvard University.

“I was the star of my own movie. Until March 2020,” said George, 23, who began playing piano about age 5. Like many derailed by the Covid pandemic, “I went into a mild depression, just because I wasn’t able to do what I love. It was horrible. But I didn’t stop. I kept playing.”

When he needed it most, George found a staff internship at one of the only arts organizations still performing live in Tampa Bay during the pandemic: The Florida Orchestra, the largest professional orchestra in the state. In January 2021, he joined the inaugural class of the Geraldine and Henry Goldhammer Leadership Excellence in Arts + Development Internship Program.

Whenever George felt down during the pandemic, his work for the orchestra kept him focused. “TFO was still playing. In the middle of a pandemic,” he said. It felt like a sign not to give up on his music. Now he is working on his master’s in piano performance at the University of South Florida, while working part-time for non-profit TFO’s Development Department as a development assistant.

At TFO, George and Mari didn’t know each other that well, but they shared a bond as part of the close-knit Florida Orchestra family – musicians, board members and staff from various backgrounds who believe in their mission of music and its power to make our community stronger and our lives better every day.

When Mari first talked to George in May about taking the piano, he turned her down. He couldn’t personally afford a Steinway. Besides, he already had a perfectly fine piano at the house he shares with his parents. Where would he put it?

But Mari wanted to give him the piano. Not sell it.

George was dumbfounded. “She wants to give me this extremely sentimental instrument, that is so attached to her family.” Why?

“My dad was all about students,” Mari said. “I feel like this would have made him happy, to help launch a deserving student.”

The Steinway Model L 1926 living room grand piano had spent almost all of its life with Robert Setzer, Mari’s dad and a prominent musician, instructor and organist, especially in the field of church music.

When organists came to town for performances over the years, they stayed with the Setzer family. Inevitably, everyone would gather around the Steinway. Mari remembers when Alexander Schreiner, famed organist for the Mormon Tabernacle Choir, taught her to play a Mozart piece on the Steinway turned with her hands behind her back, just for fun. Other notable organists who sat at the piano included Alec Wyton, a composer and teacher who had a great influence on American church music, and Sir David Willcocks, who for many years was Master of the Choristers at Kings College, Cambridge, England.

When she was young, Mari spent hours practicing at the Steinway and will never forget playing piano four-hands there with her father, who died in 2019 at age 94. Mari went on to be an organist and choirmaster at churches in Florida, Italy and Scotland.

“A lot of memories are tied up in this piano,” Mari said. “I don’t have any real reason for this except intuition, but I feel like I can really trust George to take care of it. It means something to him.”

When George first saw the Steinway at the house, it was stunning.

“Even in a poorly lit room, it was glowing. Something in me said this is meant to happen,” George said. He sat at the 5 foot, 10 inch-long piano and played a few pieces for Mari. Part of a Beethoven sonata. A Chopin etude.

Mari often talks about the piano as if it’s alive. George understands.

“It’s beautiful. It’s got character. You can hear the history when you play it,” he said. “I love it.”

All Mari asked in return was that George take care of moving the piano. And visitation rights. Still, “When they came for it, I had a little cry,” Mari said.

Now the Steinway sits back-to-back with another piano in George’s Tampa home. The arrangement works for now. As many have said to him: “You make room for a Steinway.” The piano needs a little repair work, but that can come later.

George plays the Steinway every night. It’s getting a real workout as he practices for his next big moment: George has been invited to the Prague Piano Festival in July, with lessons, masterclasses and a final performance. It will be his first trip out of the country.

“Everyone would dream of this, and it’s happening to me,” George said. “This whole journey has been insane, with Covid, a job at the orchestra. Now I’ve got this Steinway. I’m just trying to be thankful for it all.”

To honor the piano’s history, George asked Mari for photos and a bio of her dad. “Just because I know the history is so intense and amazing, that I don’t want to forget it. I want it written down with photos and put it in the bench, so it’s always a part of the piano forever and ever.”

The photo Mari gave him of her dad – taken when he was a student at Rollins College – reminds her of George. Both young and hopeful, at similar times in their lives.

Mari feels at peace with her decision and the piano’s new life:

“I want it to be happy. George will make it happy.”

For more information on The Florida Orchestra and to support the power of music, click here.

TFO adds ‘Be the Thunder’ to free park concert

The Florida Orchestra is Participating in #‎GiveDayTampaBay